I wanted to highlight in this post some of my best practice tips for Power BI data modeling.

Data modeling is one of the foundations of your Power BI reports, so it’s important to set it up correctly. It’s crucial to create a well-developed data model to help you fully communicate your organization’s information. Data modelling helps you optimize your tables and columns. Doing it right will save you so much time.

These tips and best practices will help you create a more organized model, making it easier for you to understand the relationships in your data set. Once you’ve fully grasped how to set up data models, you can easily create intuitive and meaningful Power BI reports. 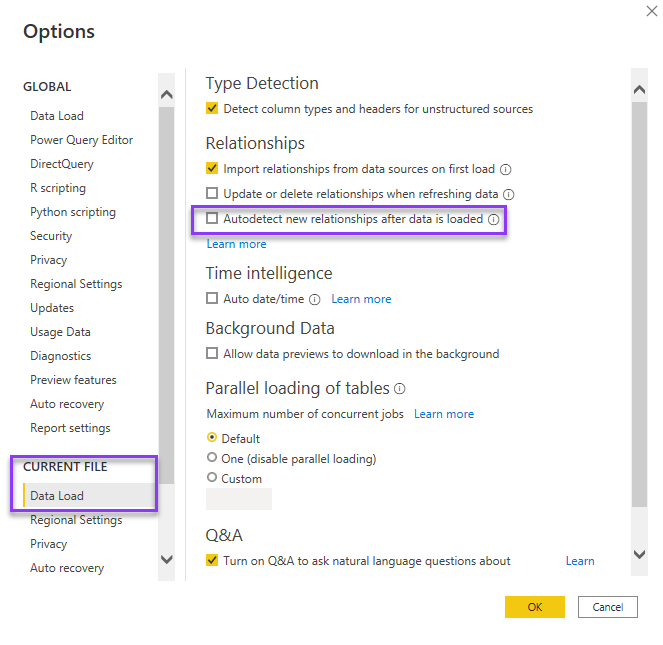 If you add a new table to the model that has field names (and values) matching with other tables in the model, then Power BI automatically creates a relationship between each of the existing tables and the new table, and this can be sometimes too many new relationships.

This can lead to an unexpected relationships and would cause data issues.

The main purposes of the auto date/time are to support convenient time intelligence reporting based on the date columns loaded into the data model.

For each date column that generates a hidden auto date/time table, it will result in an increased model size and also extend the data refresh time. 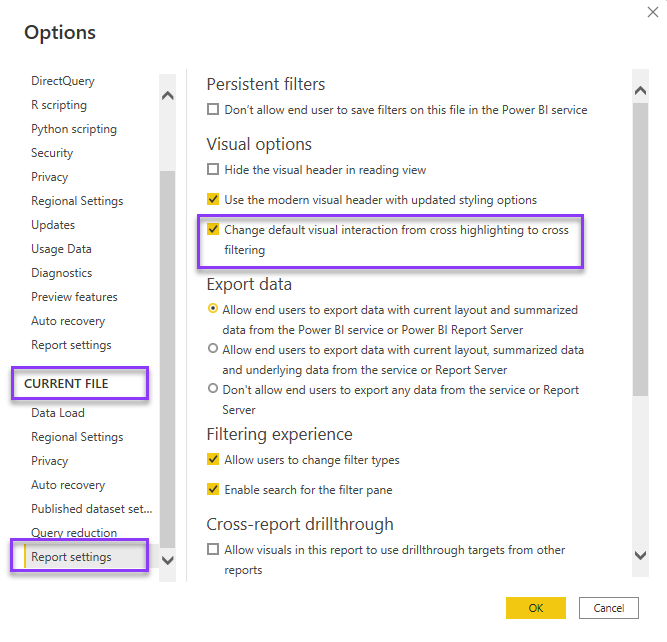 The Layout method – Waterfall or stacked around the fact table(s) as a STAR model, does not matter as long as you understand it

My personal preference is the Waterfall layout, as you can visualize how the data will be filtered (also called “Lookup” Layout)

One of the ways is by using the Star Layout

You can see that the Fact Table, fctSales, is at the center while the Dimension Tables are positioned to look like a star. 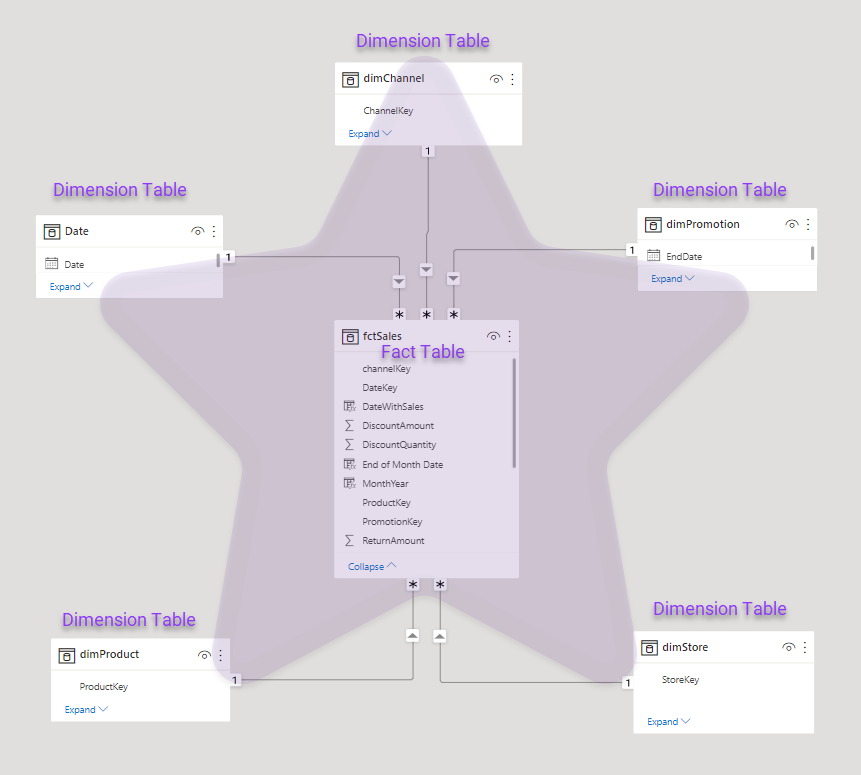 The second approach and layout for data modelling in Power BI is called the Waterfall technique. You set up your Dimension Tables at the top and the Fact Tables at the bottom.

Here are some of the benefits of this approach:

When using this layout, you need to remember these details: 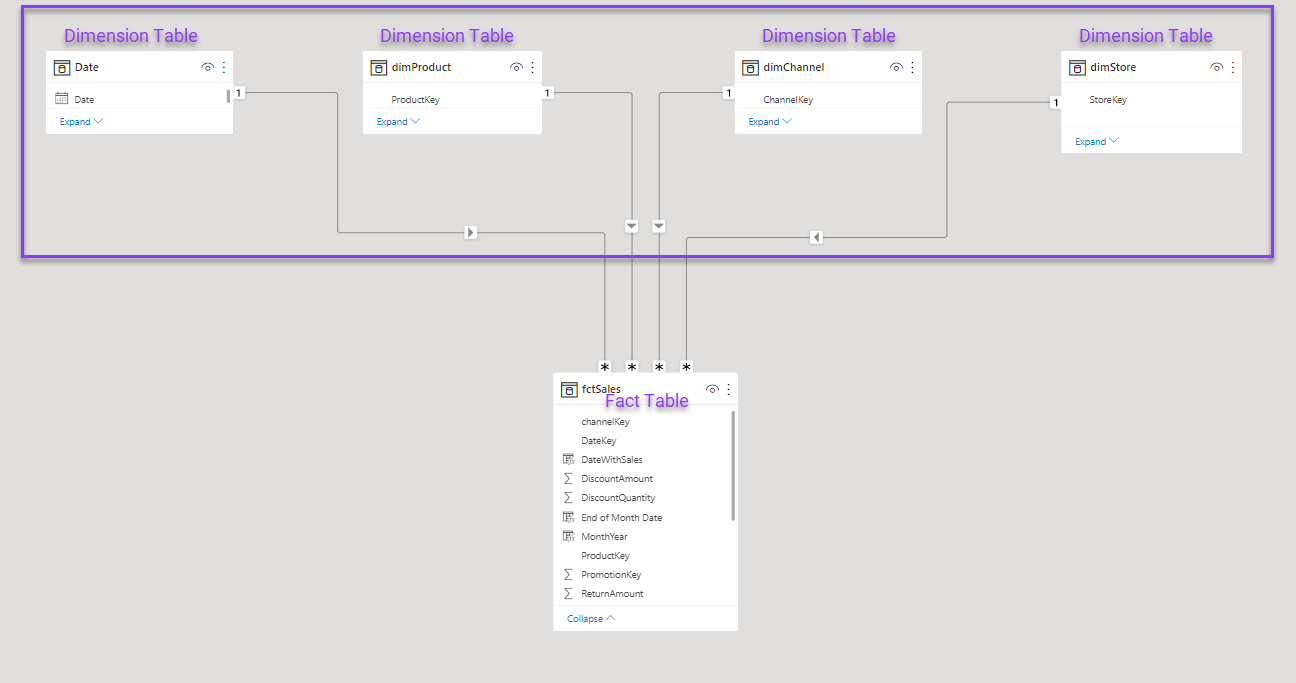 So maybe you are thinking of having a multi-fact table model, how do you go about doing this?

You will need to do the following. I have provided an example from the few points above.

2.      Agree on the granularity — Monthly, with the ability to drill

3.      Identify the common dimensions — Country and Dates (create a FK) 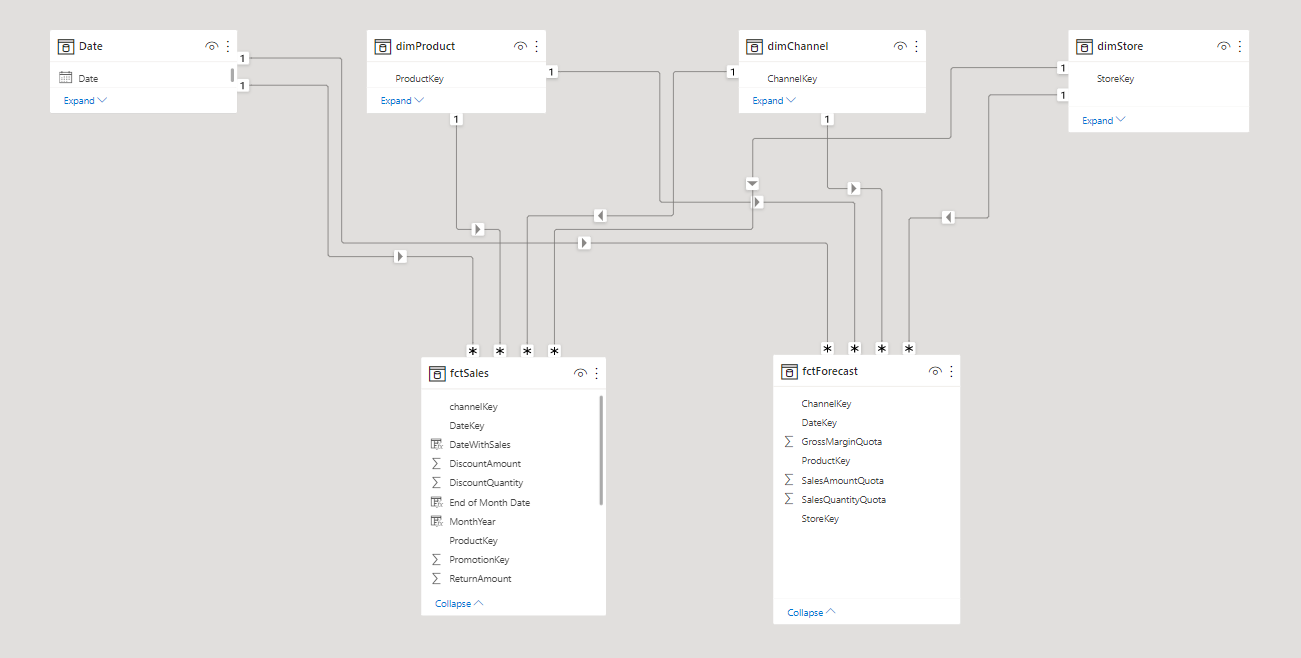 What is a foreign key? In your data model, you create relationships between a Primary Key (PK) and a Foreign Key (FK). An example of that is demonstrated below.

In the dimProduct table, you have a list of all products of your company. Each product is listed exactly one time, so you have unique values. This is your Primary Key.

In the fctSales table, a product could have multiple sales or no sales at all. This is the Foreign Key.

The Foreign Key should not be used in the Report View and should therefore be hidden (right click on it and select Hide in report view or click on the eye icon to hide). 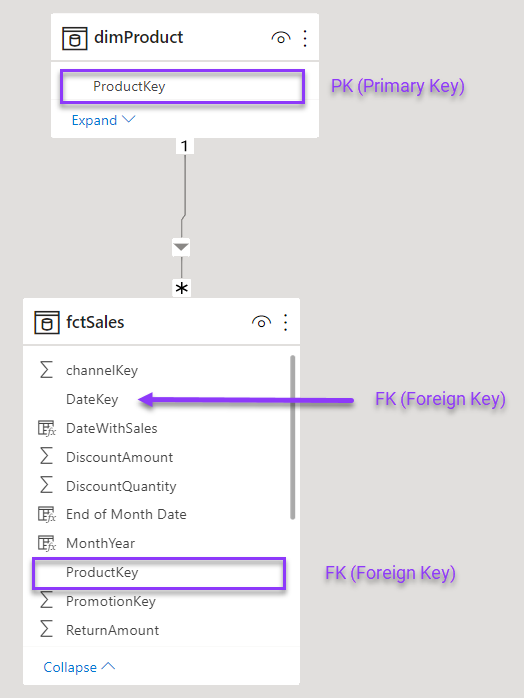 If a data refresh operation attempts to load duplicate values into a "one" side column, the entire data refresh will fail.

The four options, together with their shorthand notations, are described in the following bulleted list:

The one-to-many and many-to-one cardinality options are essentially the same, and they’re also the most common cardinality types.

When configuring a one-to-many or many-to-one relationship, you’ll choose the one that matches the order in which you related the columns. Consider how you would configure the relationship from the Product table to the Sales table by using the ProductID column found in each table. The cardinality type would be one-to-many, as the ProductID column in the Product table contains unique values. If you related the tables in the reverse direction, Sales to Product, then the cardinality would be many-to-one.

Please check the below example of Many to one cardinality relationship.

A one-to-one relationship means both columns contain unique values. This cardinality type isn’t common, and it likely represents a suboptimal model design because of the storage of redundant data.

A many-to-many relationship means both columns can contain duplicate values. This cardinality type is infrequently used. It’s typically useful when designing complex model requirements. You can use it to relate many-to-many facts or to relate higher grain facts. For example, when sales target facts are stored at product category level and the product dimension table is stored at product level.

When you create a relationship in Power BI Desktop, the designer automatically detects and sets the cardinality type. Power BI Desktop queries the model to know which columns contain unique values. For import models, it uses internal storage statistics; for DirectQuery models it sends profiling queries to the data source. Sometimes, however, Power BI Desktop can get it wrong. It can get it wrong when tables are yet to be loaded with data, or because columns that you expect to contain duplicate values currently contain unique values. In either case, you can update the cardinality type as long as any “one” side columns contain unique values (or the table is yet to be loaded with rows of data).

Avoid using Many to Many cardinality. This can lead to unexpected results. Use it if you know what are you doing!
Try to follow the best practice and use Star Schema approach. In most cases the cardinality there is Many to One (One to Many)

The two fields that you are connecting to each other should have the same data type. Otherwise, when you create a relationship, you get an error. 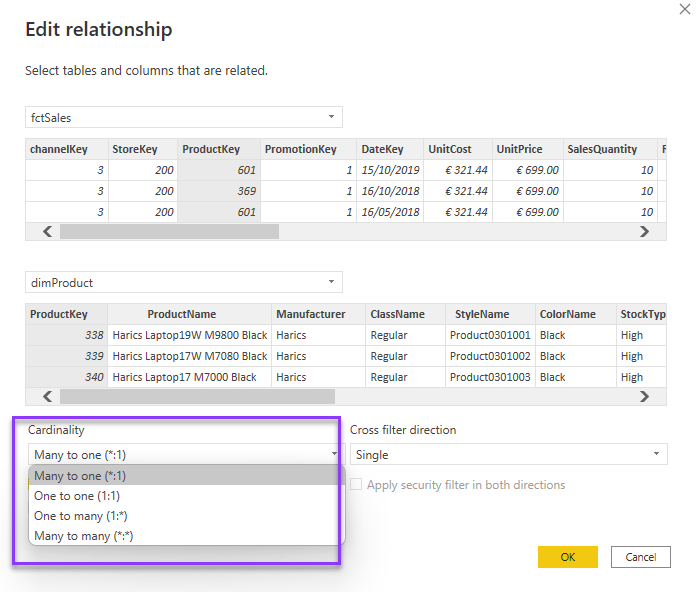 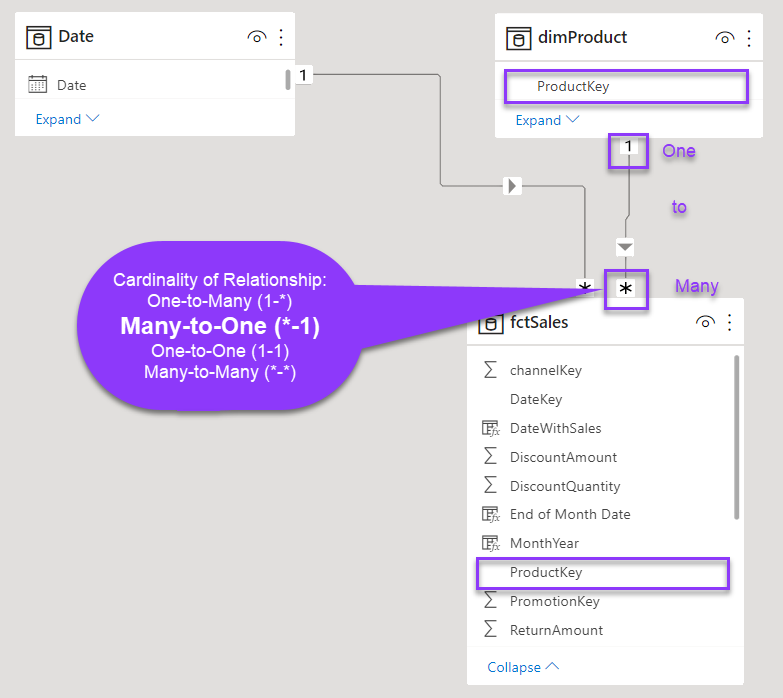 The ProductKey column in the dimProduct table contains unique values.

Each model relationship is defined with a cross filter direction. Your setting determines the direction(s) that filters will propagate. The possible cross filter options are dependent on the cardinality type. 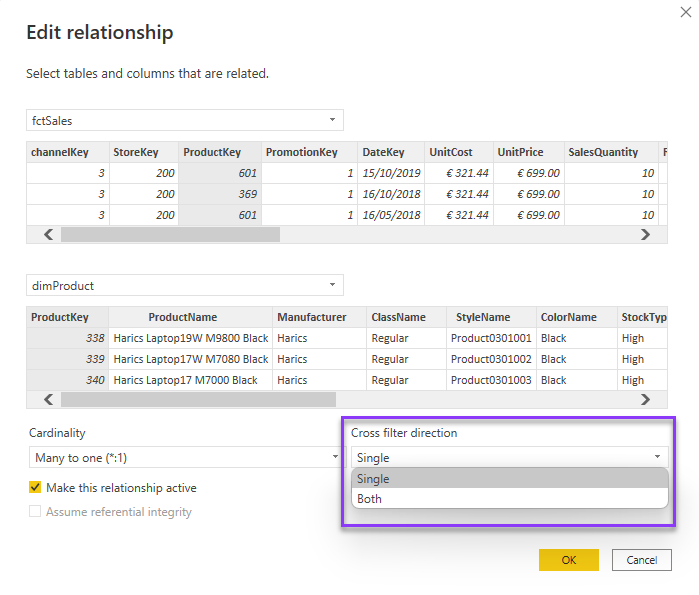 Alternatively, to avoid using bi-directional relationships, you can add a filter to the slicer visual to exclude items that are blank. It is worth noting that you would need to do this for each visual that uses fields across dimension tables. 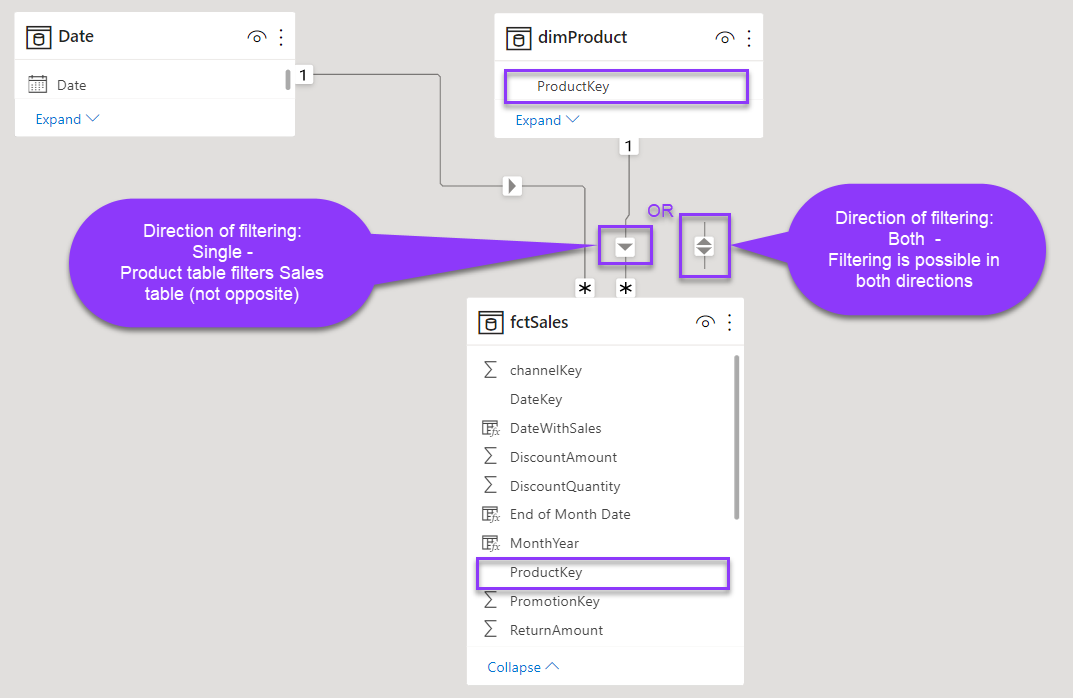 There can only be one active filter propagation path between two model tables. However, it’s possible to introduce additional relationship paths, though you must set these relationships as inactive. Inactive relationships can only be made active during the evaluation of a model calculation. It’ is achieved by using the USERELATIONSHIP DAX function.

A role-playing dimension is a dimension that can filter related facts differently. For example, at Adventure Works, the date dimension table has three relationships to the reseller sales facts. The same dimension table can be used to filter the facts by order date, ship date, or delivery date. 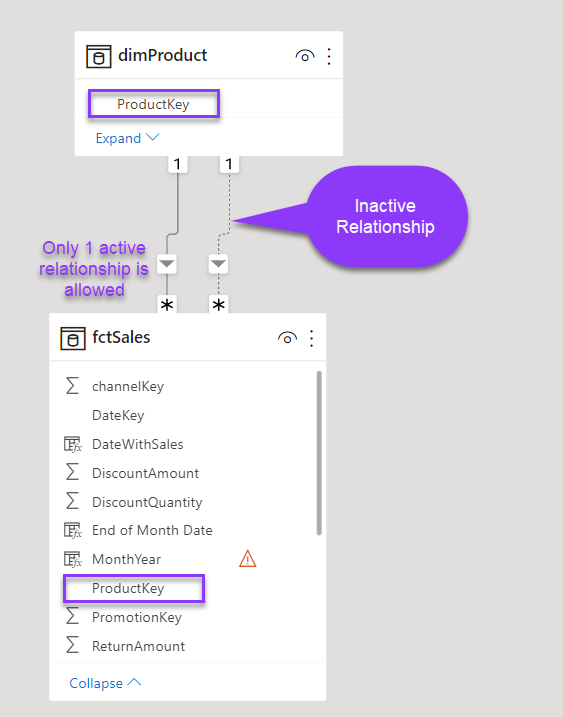 In order to have a well structured report and keep your data model organized, it’s best to organize measures in separate tables. See below how to create dedicated Measures Tables:

2. Name the table and load it to the report 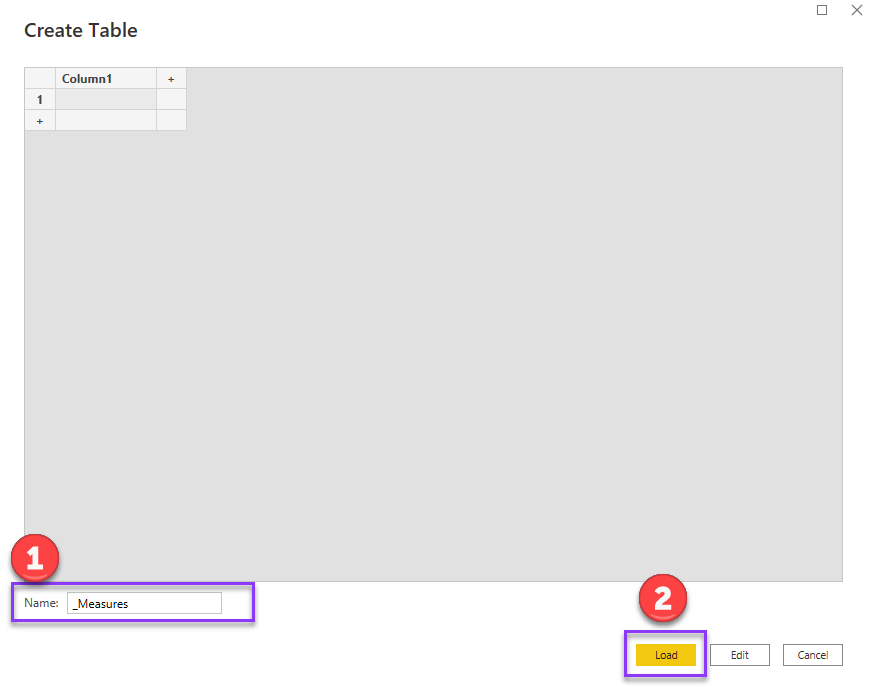 3. The new table has been added to the report 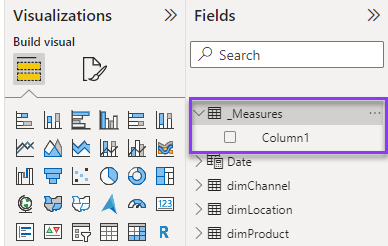 4. Allocate a new measure to this table 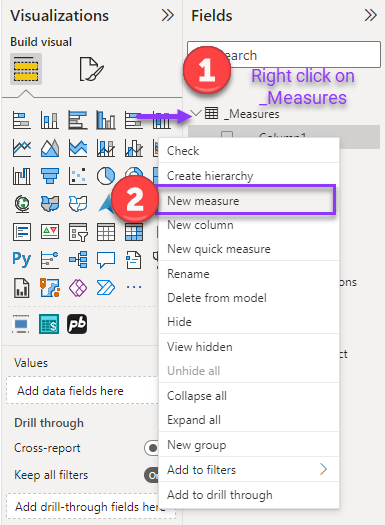 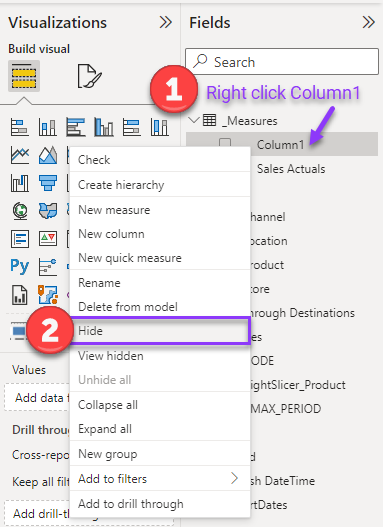 DAX measures can become quite complex. To still be able to read complex DAX functions, you should consider adding some formatting to the formula in order to increase readability.

Alternatively, you can use Dax Studio or daxformatter.com to beautify your measures
Use CamelCase naming for hidden columns

2. Indent to create a structure. Use Tab key to indent

3. Add comments.
For more complex DAX measure, you can add comments to explain what the measure is calculating.
* For short use // or --
* For multiple code lines you can use block comment /* your dax code */

Organize your measures in folders

Often, you end up having a big number of measures in a report. To still have the overview, you can organize measures in folders. To create and manage folders, you need to go to the Model view. 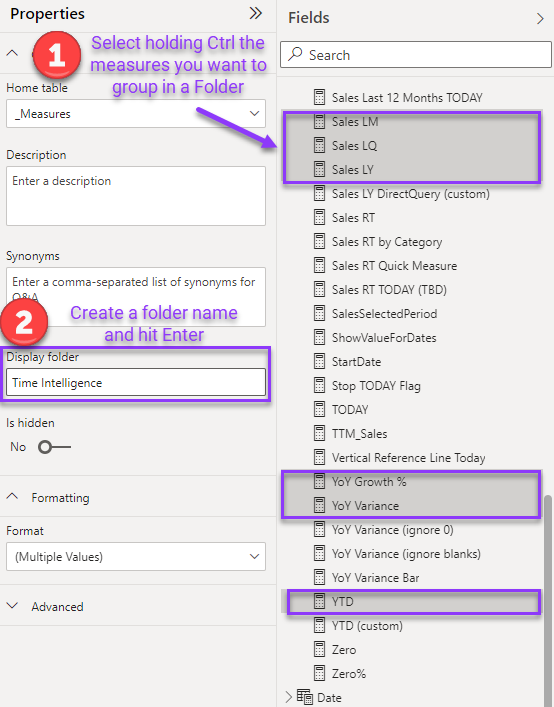 The newly created measure folder will appear in your model.

Once a folder has been created, you can also use drag and drop to move measures in between folders. 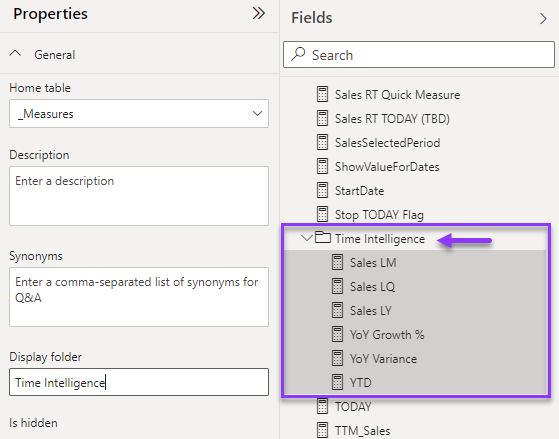 Date table will not be discussed in this post. How to create a date dimension can be found here

Disconnected tables and their purpose

Disconnected tables are useful in a variety of ways, allowing a user to select a value that drives the behavior of a dynamic measure, or by grouping values and performing some kind of dynamic calculation.

Typical use of disconnected tables is toggle slicers, i.e. MTD/YTD

This table was created using the Enter Data feature and includes only one column named Period, which includes the following values: